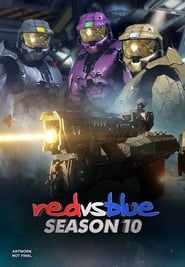 Red vs. Blue: Season 10 is the tenth season of Red vs. Blue, an action comedy animated/machinima series produced by Rooster Teeth Productions and loosely based in the Halo universe. The season premiered on Memorial Day, May 28, 2012. Season 10 continues the dual storylines of Red vs. Blue: Season 9. The first story acts to conclude the Project Freelancer back-story that began in the previous season, which is again depicted using pre-rendered CGI. The second picks up from the very end of Season 9 in the present, directly after Epsilon-Church’s rescue from the memory unit, and follows Carolina’s quest to find and kill the Director with the help of the Reds and Blues. The season also concludes the series’ second story arc that began with Red vs. Blue: Reconstruction. The present story-line returns to the Halo 3 engine which was used throughout most of the Recollection trilogy and again at the very end of Season 9, and the epilogue is depicted in the Halo 4 engine. The season finale of Season 10 aired on November 5, 2012, which brought the total number of episodes in the series to 200.