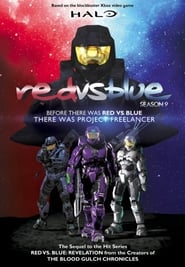 Red vs. Blue: Season 9 is the ninth season of Red vs. Blue, an action comedy animated/machinima series produced by Rooster Teeth Productions and loosely based in the Halo universe. The season premiered on June 14, 2011 as a continuation of Red vs. Blue: Revelation. Season 9 is the first season in the Project Freelancer Saga, as it follows two apparently separate but connected storylines. The first storyline is set in the present that details events that play out in the Epsilon AI’s memories of Blood Gulch, which are depicted with the Halo: Reach engine. The second storyline is a prequel, set before the events of Red vs. Blue: The Blood Gulch Chronicles, detailing events concerning Project Freelancer at its peak and is depicted using pre-rendered CGI rather than the Halo: Reach engine, allowing for action sequences and settings outside of the maps provided in Halo: Reach. It is not known until Episode 20 what happens to the characters following Revelation. Unlike Revelation, machinima and CGI are not blended; each medium is entirely separate and represent different eras of the Red vs. Blue storyline.