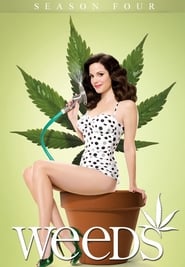 On November 5, 2007, Showtime ordered 13 new episodes for a fourth season of Weeds. It started on Monday, June 16, 2008 and concluded on Monday, September 15, 2008. The season opener “Mother Thinks the Birds are After Her” was the last episode with “Little Boxes” as the theme song. The opening credits of subsequent episodes, after a recap of previous episodes, begin with a video title card unique to each episode. For the second episode of the season, for example, a highway sign reads “Weeds — Created by Jenji Kohan” — the embedded text used for all title cards since the show’s inception. Each title card also has a prop or part of the setting that refers to a plot element in the episode. Some part of the title card morphs into a marijuana leaf. In the highway sign example, a downward arrow designating a lane becomes a slightly larger pot leaf. Silas and Shane are aged 17 and 13 respectively. However, Silas turns 18 at the end of the season.